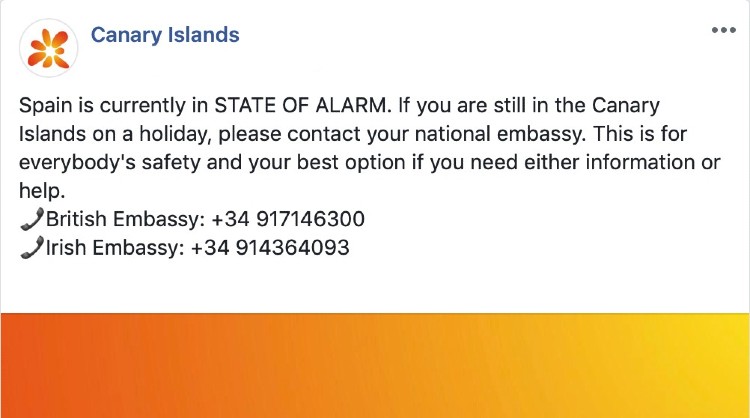 Late on Thursday, 19th March, and as part of the communication campaigns being carried out, social media in the Canary Islands started to publish new messages in order to inform tourists who remain on the Canary Islands of the closure of tourist accommodation establishments to the public.

The closure of establishments has been carried out in stages in the Canary Islands, but this decree by the Ministery of Health will come into force on the 26th March in order to enable the last guests to leave these establishments. To this end, several messages have been sent out recommending that tourists should return home and that they should contact their embassies or consulates so they can be helped to resolve their personal situation.

Dissemination in eight languages for tourists from twelve different countries

This message has been sent out on Facebook and on Instagram in eight languages (English, German, Italian, French, Norwegian, Dutch, Swedish and Polish) and, thanks to the segmentation technology online platforms offer, the campaign impacts those tourists who are currently visiting the Canary Islands from the United Kingdom, Ireland, Germany, Austria, Switzerland, Italy, Norway, Sweden, Belgium, Holland, France and Poland. In addition, posters have been made for tourist accommodation establishments nofitying tourists of their imminent closure.

The decree by the Health Ministery specifies that, as from Thursday, 26th March, all hotels and similar establishments, tourist accommodation and other short stay accommodation, campsites, caravan parks and other similar establishments located anywhere in Spain, should close to the public as part of a string of measures to protect the health and safety of civilians, to contain the spread of the coronavirus and to strengthen the public health system. As the published decree explains, the concentration of people in tourist accommodation establishments who share certain comunal areas implies an increase in the risk of contagion, therefore requiring their activity to be suspended in order to ensure the containment of the pandemic.