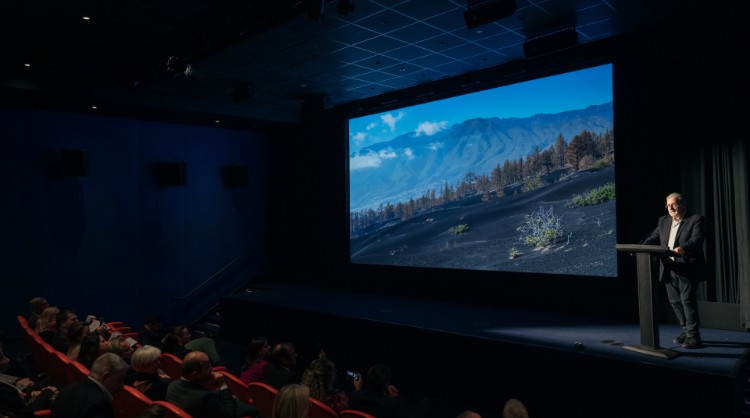 On Tuesday 13 December we launched the premiere of the TV programme Hidden Canary Islands to a large group of tour operators, travel agents and US media representatives. The one-hour programme directed by Emmy-winning reporter Peter Greenberg will be shown on US public television PBS to a potential audience of 260 million viewers.

Part of our market diversification strategy, this action is a great opportunity to engage with US tourists and position the Canary Islands brand as a holiday destination choice, highlighting the region’s diverse scenery, good climate and cultural and identity aspects as distinguishing features. Tourists from the US are known for seeking new experiences and taking an active interest in the local culture, and also stay longer than average and have considerable spending power.

We explained to attendees that, in addition to direct flights between Tenerife and New York in summer, the Canary Islands are one of the best connected destinations in Europe, with 722 routes operated by 54 airlines joining us to 153 airports.

United States tourists are known for seeking new experiences and taking an active interest in the local culture, and also stay longer than average and have considerable spending power.

Well-known CBS News reporter and programme director Peter Greenberg is a key advocate in the US market. His web page, PeterGreenberg.com, is a showcase for news about the travel sector, offering travel tips and recommendations about places to go. It has more than 15 million impacts a month and a newsletter with 50,000 weekly subscribers.

During his talk, Greenberg explained that his programme is based on highlighting unique aspects of destinations and experiences that don’t typically feature in travel guides or on travel websites. He said he found spectacular features in the Canary Islands and was surprised not only by the region’s scenery, food and culture, but also by its enormous diversity.

The one-hour programme recorded in the Islands in November last year includes unique experiences on each of the eight islands, focusing on the destination’s cultural and identity values to provide a broad, distinctive image of the Canary Islands that’s very appealing to the US market.

Turismo de Canarias was behind the making of this audiovisual document, in collaboration with the promotion entities of each island, which actively took part in selecting locations and experiences and provided logistics during filming.

Millions of viewers on various continents

Hidden Canary Islands will run on PBS for several years and is likely to be seen by around 260 million viewers in the US and another 150 million people after distribution in Europe, Latin America, Africa, Asia and the Middle East.

Hosted by Peter Greenberg, the programme premiered during peak viewing time on public TV, covering large markets such as New York, Los Angeles and Chicago. The content will also be available on platforms including Amazon Prime and AppleTV+.

Greenberg’s target audience in the United States has a profile of high purchasing power and an interest in culture, and also travels frequently, both in the US and internationally. A high percentage of PBS content consumers have university qualifications and earn more than $100,000 a year.