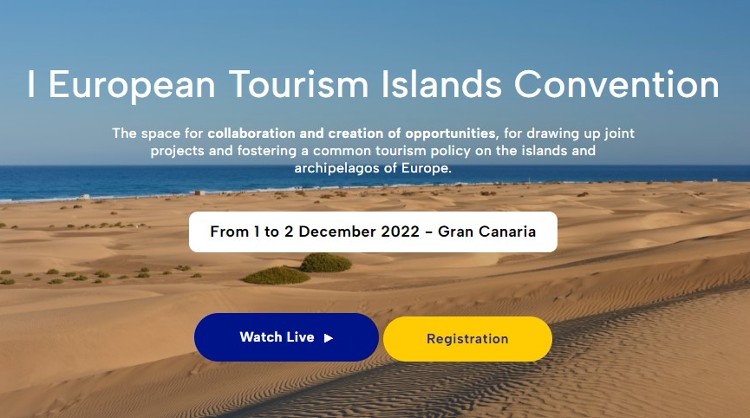 The Convention, which we’ve co-organised with Excelcan, will be held on 1 and 2 December in Gran Canaria and will include the participation of senior management from leading Spanish and international tourism firms, as well as representatives from the European Union, the World Tourism Organization (WTO) and islands including Gozo, Corsica, Crete, Azores, Guyana, Madeira, Sardinia and the Balearics. The programme, content and goals of the convention are available on the Convention website.

The European Tourism Islands Convention was conceived as a space for dialogue, coordination, conducting studies and drawing up projects. The goals are to open a discussion forum about the new European tourism policy, based on the March 2021 Resolution of the Tourism and Transport Commission of the European Parliament. The attendees, particularly the authorities from the European Union and EU Member States, will be given the conclusions on the new European tourism policy and the proposal to create a European Tourism Agency.

The drive for an Association of European Tourism Islands aims to ensure joint action and the drafting of an action plan for the goals of green transition, digital transformation and fighting climate change.

As islands with common issues based on a feeling of remoteness and isolation, submitting joint projects would ensure significant lobbying force within the European Union, emphasising the strategic importance of tourism and the need to agree on a new common tourism policy. The drive for an Association of European Tourism Islands aims to ensure joint action and the drafting of an action plan for the goals of green transition, digital transformation and fighting climate change based on the criteria of the Glasgow Summit.

Another goal is to drive the adaptation of companies to new sustainable and competitive tourism models through digital transformation and modernisation.

On Friday, European Commission Head of Unit for Tourism, Marie-Hélène Pradines, will give the keynote: “The importance of tourism islands in the European tourism context”, which will be followed by TUI CEO, Sebastian Ebel, with the keynote: “The future of leisure travel”.

The European Tourism Islands Convention will also host the General Assembly of the Network of Insular Chambers of Commerce and Industry of the European Union (Insuleur).

We're co-organising this event with Excelcan (Association for Research, Study and Excellence in the Canary Islands Tourism Sector), and it will be held at ExpoMeloneras Conference Centre. Multinational companies taking part as co-organising partners include Telefónica, Atos and Amadeus, with the Starlight Foundation as a sponsoring member.

On Wednesday 30 November, as part of the Conference, the General Assembly of the Network of Insular Chambers of Commerce and Industry of the European Union (Insuleur) will be held, organised by the Official Chamber of Commerce, Industry, Services and Navigation of Gran Canaria and the Ministry of Finance, Budget and European Affairs of the Canary Islands Government.

*Financed as part of the European Union response to the COVID-19 pandemic. Specific objective of REACT-EU, S.E. 20.3.2, to support economic support measures in the regions which are most dependent on sectors most affected by the COVID-19 crisis.