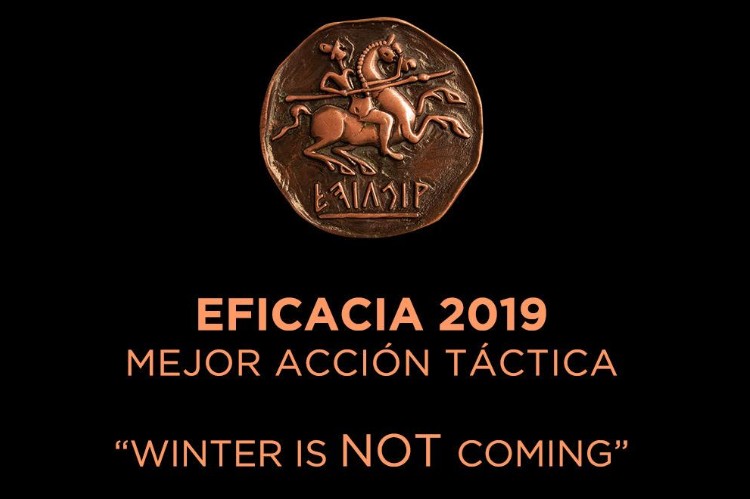 The Canary Islands brand continues to pick up accolades. The prestigious Eficacia Awards  were held last Thursday, 24th October in Madrid, the most important of its kind in Spanish advertising, which does not only rate creativity but also business results, in which “Winter is not coming” came away with the bronze award in the category of “Best tactical campaign”.

In addition to this award, the Canary Islands went head to head with other top international brands as finalists in a further four categories, meaning the total of five nominations put the brand in fourth place out of all the advertisers in Spain, including Audi, Telepizza, Campofrío, Burger King, MacDonald’s, Movistar and Samsung. The other campaigns by the Canary Islands that made the short list at these awards, organised by the Spanish Advertisers Association, included “Momento Canarias” and “Ryder Cup”.

Two Golds and three Bronzes since 2016

This is the fourth successive year that the Canary Islands brand has been recognised at the Business Communication Efficiency Awards, a period in which they have earned the top award for global communication strategy, developed by Promotur Turismo de Canarias.

These and other many national and international awards the brand has won since 2015 place the Canary Islands at the forefront of tourist marketing, in their continual commitment to innovation and technology.

“Winter is not coming”

This promotional campaign, which is 85% co-financed by the European Regional Development Fund (FEDER), was made in eight different languages last February and March to remind Europeans that while they were shivering in freezing winter temperatures, the Canary Islands were basking in the best climate in the world. As part of a context marketing strategy, the campaign was aired just prior to the final season of a well known television series it makes reference to. The aim was to build on its renown, at a time when millions of viewers were about to tune into this fictional television series.