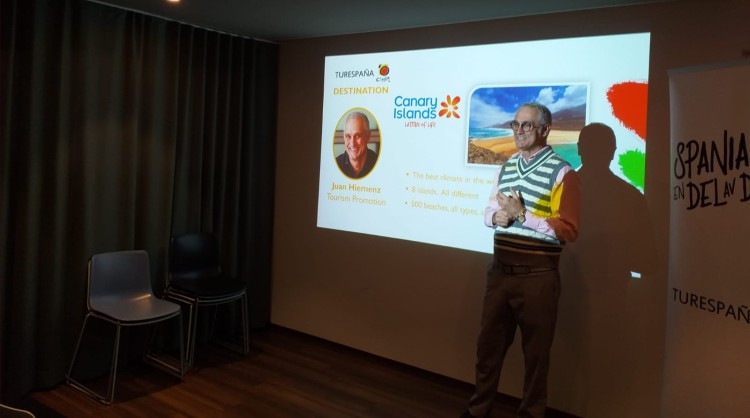 On Wednesday, 20th November, Turismo de Canarias travelled to Reykjavik to one of the most important events to be held in Iceland which brings together travel agents, tour operators and the Icelandic press, keen to learn all about tourist destinations, including the Canary Islands.

Iceland is a growing market. The number of airline seats programmed between the months of November and March between Reykjavik and Gran Canaria and Tenerife has increased by a total of 24,000 seats, reflecting an rise of 44 % compared to the previous winter season. Added to this figure are forecasts for charter flights, which alongside the regular flights, come to around 40,000 seats. These figures highlight the convenience of continuing to support the islands at professional meetings in the tourism industry held in this country.

The work schedule featured meetings with representatives from companies such as Hemisferdir, Vita, FI Travel, Mundo, It Fedir  Komdumed, Icelandoutfitters, among others, as well as journalists from the media, including Frettabladid, Bladamaour Vikunnar, Mannlif and Lifiderferdalag. Alongside the “sun and beach” offer, information was provided on sports pursuits in natural surroundings together with a range of leisure and entertainment activities, the growing reason behind why this market is choosing the islands for their holidays.

This is so much so, that 34.4 % of Icelanders consider fun activities a relevant aspect when it comes to deciding where to go for their holidays, well above the average which stands at 20.7 %, although relaxation is also one of their top motivations, as 68 % come to the islands in order to get away from it all.

The Icelandic market is also noted for a higher than average spend, the tourist spend per trip standing at €1,777, compared to the average €1,196 of the rest of visitors. They also stay for longer (13.9 nights), compared to the average figure of 9.3 nights. The total expenditure for the Icelandic market was €87 million in 2018, puttng the country in 17th place overall in the table in terms of tourist expenditure. Their favourite island is Gran Canaria, and they are extremely loyal as 66.4 % are repeat visitors to this island, while this figure stands at 52.8 % in the case of Tenerife.

Meanwhile, connectivity with Iceland is guaranteed this winter season thanks to the routes between Reykjavik and Gran Canaria, with a frequency of two flights per week, and between Reikiavik and Tenerife Sur, with four flights per week, in both cases with Norwegian Airlines.