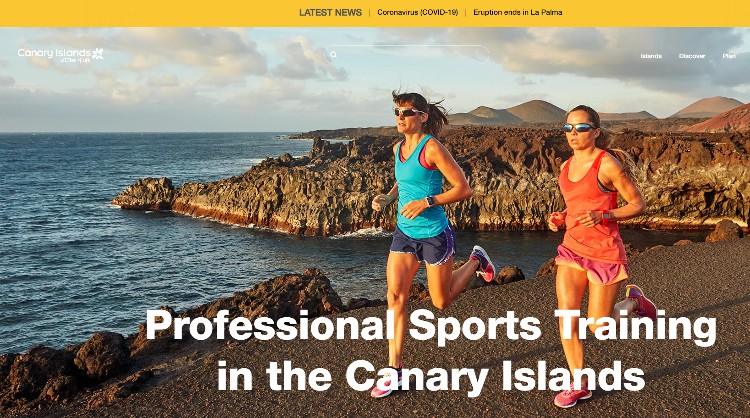 Forming part of hellocanaryislands.com, the new landing page provides specific content to position the Canary Islands as an ideal destination for sports professionals from various disciplines who need to train year round to improve performance. Olympic medal winners including cyclist Annemiek van Vleuten, track athlete Marcell Jacobs and Paralympic swimmer Miquel Luque have become advocates of the Canary Islands as the perfect place for training.

The website is structured to host valuable content aimed at athletes from the ten disciplines included in the strategy for this segment, defined across three factors: holding events as part of professional circuits, bringing together a large number of international athletes and teams, and providing specialist services and optimum conditions for top-level sport. It covers triathlon, cycling, trail running, swimming, athletics, beach volleyball, sailing, surfing, windsurfing and bodyboarding.

Professional sports tourism is essential to our diversification strategy, because this long-stay segment is less dependent on air connectivity, enables more sustainable and realistic consumption of resources, and ensures greater and better distribution of spending at destination.

The communication strategy for this segment targets people who make decisions about where to train, from individual sportspeople to heads of performance and coaches looking for suitable destinations for physical preparation and pre-season training.

The first posts on the new website are about triathlon, cycling and trail running, and other sports will be added soon. The contents are backed up by first-hand testimonies from elite sportspeople and Olympic medallists who are frequent visitors to the region and have become ambassadors for the Canary Islands.

Elite sportspeople and Olympic medallists who are frequent visitors to the region have become ambassadors for the Canary Islands through their testimonies.

In cycling, the destination advocate for 2022 is Annemiek van Vleuten, gold and silver Olympic medallist in time trial and road racing, respectively, at the Tokyo Olympics. The professional cyclist has been coming to the Islands twice a year since 2015, and acknowledges the fundamental role of the Canary Islands in her training, saying that it helped her achieve recognition as the top-ranked female cyclist in the world in 2021.

To promote the Islands among professional cyclists, we also have Primoz Roglic, the top-ranked male cyclist in the world in 2020 and winner of the Vélo d’Or, the equivalent of football’s Golden Ball. With his team, Team Jumbo Visma, Primoz comes to the Islands two or three times a year.

To showcase what’s available for track athletes, the Canary Islands has the support of Marcell Jacobs, winner of two gold medals at the Tokyo Olympics and currently considered the world’s fastest runner. His most recent stay in Tenerife was in January 2022, and he returns every year to boost his performance. The triathlon ambassador is Patrick Lange, double world champion in the Ironman World Championship, the top international competition in this discipline. The elite athlete trains in Lanzarote and Gran Canaria and was the first competitor to break the eight-hour mark in Hawaii’s Kona Ironman, the toughest event on earth.

Another discipline we’ll profile through medallists is beach volleyball, with Olympic player Liliana Fernández, who’s been closely linked to the Canary Islands for 15 years, since she moved to Tenerife, where she trains year round with professional pairs who come to the Islands.

Swimming is also represented, through Miquel Luque, a Paralympic champion who’s won seven medals at the last six Olympics (from 2000 to 2020) and is a frequent visitor to one of Tenerife’s high performance sports centres.