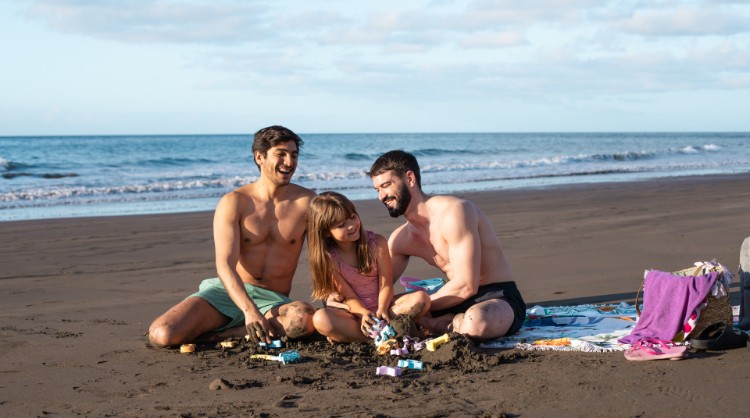 Like ever year, the Canary Islands are joining the celebration of LGBTQ Pride Day. On this occasion, the promotional activity is based on the destination’s natural approach to diversity. With the claim “It’s crystal clear”, we’re featuring an audiovisual production on the social media of five markets aimed at this sector, showcasing how natural it is that there are different types of couples and families.

The video highlights the normality of people’s sexual orientations, showing them in a way that’s as natural as, for example, “the white sand beaches” on the Islands. The aim is to approach diversity as something that the destination takes on board and perceives as completely normal, with tolerance.

This concept of obviousness is a novel approach to a tourism segment that visits the Islands in large numbers, in a destination where differences are accepted and, as a result, everyone’s sexual orientation is respected. The Canary Islands have for decades been an LGBTQ friendly destination and a leading light for this sector.

With the claim “It’s crystal clear”, the promotional activity aims to uphold the empathetic connection the Canary Islands brand has with LGBTQ tourism.

The piece aims to uphold the empathetic connection the Canary Islands brand has with LGBTQ tourism, and will run from the week before the celebration of a very important day for the sector (28 June) through an action with attractive messages that steer clear of opportunism.

The video will feature on Canary Islands social media on Meta (Instagram and Facebook) until Thursday 30 June to impact in five markets: Spain, United Kingdom, Germany, France and Italy.

LGBTQ tourism in the Canary Islands

The LGBTQ sector is a priority category for the Canary Islands, and one that the region competes for internationally. This segment is very attractive for the destination because of its higher level of spending, as much as four times the average.

As an overview, based on a sample of LGBTQ exclusive accommodation in the Canary Islands, the segment is mostly made up of men, predominantly German, British and Spanish. In order of frequency, they’re followed by Swedish, Danish, Dutch and Belgian visitors.

LGBTQ tourists have a higher level of spending - up to four times the average - and are mostly men who travel alone or with friends and value above all the weather and the LGBTQ scene in the Canary Islands.

They’re tourists who travel alone or with friends, stay in apartments and, in the case of the Canary Islands, value above all the weather, the LGBTQ scene, the nightlife, the environment of tolerance, the beaches, the LGBTQ exclusive accommodation, and the good restaurants.

The accommodation that caters for this segment, mostly apartments, has considerably higher than average occupancy rates and generates higher returns.

* Financed as part of the European Union response to the COVID-19 pandemic. Specific objective of REACT-EU, S.E. 20.3.2, to support economic support measures in the regions which are most dependent on sectors most affected by the COVID-19 crisis.