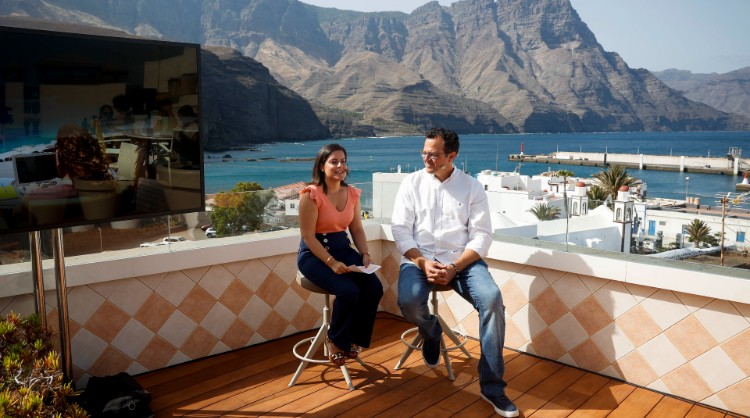 The strategy we’re working on to position the region as one of the best places in the world for remote working continues to advance with positive results, including a rise in arrivals of remote workers and the amount they spend at destination. The strategic framework includes the collaboration agreement we’ve entered into with Airbnb, through an international campaign to consolidate the Canary Islands as one of the world’s top 20 destinations for remote working.

According to data from leading remote work website Nomad List, in 2021 the Canary Islands received 35,400 remote workers whose average spending was 3,171 euros per person per trip, almost three times more than holiday tourists, who spent 1,206 euros. Although this segment accounted for 0.8% of total tourism in 2021, it generated 2.12% of tourism turnover in the Islands, reaching 150 million euros last year. The figures will be higher in 2022, as the volume of tourism income generated by these visitors has already exceeded 112 million euros in just six months.

We’ve far outstripped the goals we set in November 2020, when we first included remote workers in the segment diversification strategy, from a 10-year objective of 30,000 remote workers to the approximately 47,000 who arrived in the Islands in 2021, according to Nomad List. The ten-year objective was surpassed in just 12 months.

The arrival of these long-stay tourists is very positive for the destination, as they represent sustainable tourism for the economy, the environment and the community, and provide guarantees in uncertain times such as the pandemic and the financial climate caused by the war in Ukraine. The aim of the strategy is to reduce dependence on segments associated exclusively with the “sun and beach” category and traditional markets and strengthen the main economic sector of the Canary Islands in an increasingly unpredictable context.

The remote work segment is a model of sustainable tourism for the economy, the environment and the community, and is very positive for the destination of the Canary Islands.

To continue moving ahead in the strategy of attracting these visitors, we’ve entered into a collaboration programme with Airbnb, the world’s largest holiday rental platform, to consolidate the Islands as one of the 20 most remote worker-friendly destinations in the world - the only one in Spain and one of just six in Europe.

This collaboration is part of “Live and Work Anywhere”, the international initiative launched by Airbnb to position itself as a global leader in long-term remote work rentals. Here at Turismo de Islas Canarias we’ll coordinate the communications content produced by Airbnb to consolidate the region as one of the world’s top destinations for remote workers. We’ll also work closely with Airbnb to create a custom-built hub for the destination on the platform, aiming to specifically encourage long stays in the Islands.

At Turismo de Islas Canarias we’ll work with Airbnb to create a custom-built hub for the destination on the platform to showcase the best local long-term accommodation.

The hub will showcase the best local long-term accommodation to inspire travellers and show them what’s available. Remote workers will have access to all the relevant information about entry requirements and tax policies, plus information about the extensive range of tourist activities to enhance their stay.

According to data from Repeople, remote working is becoming increasingly popular, with higher numbers of employees than self employed workers now that companies are allowing their staff greater flexibility. In addition, one third of its clients are couples or even families, compared to a previous trend of 85% solo visitors. The average age is rising and remote workers are typically aged 30 to 40 or older. By country of origin, the list is headed by Germany (27%), followed by the United Kingdom (12%), the Netherlands (10%), Czech Republic (8%), the United States (6.6%), Spain (6.6%) and Ireland (5%).

On Friday 15 July, Yaiza Castilla, Regional Minister of Tourism, Industry and Commerce, José Juan Lorenzo, Executive Director of Turismo de Islas Canarias, and Nacho Rodríguez, CEO and founder of Repeople and president of Asociación Canaria de Espacios Colaborativos (Canarian Association of Collaborative Spaces) met with professionals currently remote working at the co-living space run by Repeople in Agaete (Gran Canaria). The group of 22 professionals of five nationalities, mostly from the United States and Canada, belong to Wi-Fi Tribe, the leading community of world travellers for digital nomads, which also visited the island at the end of 2020.

German tour operator FTI recently announced its support for long stays in the Canary Islands ahead of the winter season, offering extended stays at hotels.

* Financed as part of the European Union response to the COVID-19 pandemic. Specific objective of REACT-EU, S.E. 20.3.2, to support economic support measures in the regions which are most dependent on sectors most affected by the COVID-19 crisis.