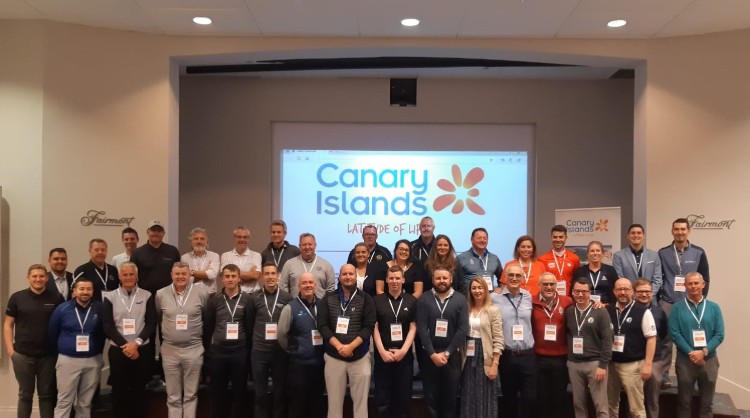 With the aim of promoting the islands’ wide range of golf courses and positioning them as an unrivalled destination for playing golf, even in winter, Promotur Turismo de Canarias has organised a roadshow at the most prestigious golf courses among British golf enthusiasts. This promotional campaign is aimed at over 90 professionals from the world of golf tourism, including specialist tour operators and the media in the United Kingdom.

Saint Andrews in Edinburgh and The Belfry in Birminghan have been the settings for these events which the Canary delegation, comprising hotel and golf course representatives, have looked to recommend the Canary Islands to these professionals as the best place to come on a golfing holiday.

This format has enabled them to establish more fluent relations with both wholesale and small-scale British travel agents who specialise in the marketing and sale of golf. In addition to some golf action, the day included presentations, prize-giving and the closing of the event, in which the Canary delegation, led by Turismo de Canarias, highlighted the value of their products and services related to the sport of golf. The group travelling to the United Kingdom includes the golf course associations from Gran Canaria, Lanzarote, Fuerteventura and Tenerife, together with hotel professionals and other businessmen related to golf services.

Given the importance of the British market to the Canary Islands, Turismo de Canarias have stepped up their promotion in this key market, by organising events in the countries of origin, such as this itinerant tournament which presents golf as a complement to the sun and beach offer, one of the main attractions for this segment of the market.

In 2017, a total of 138,170 golfing tourists came to the islands, generating in turn a global turnover of 235 million euros. These types of travellers are usually high earners, whose average associated spending is above the average daily tourist spend of 140.18 euros, standing at 194.34 euros a day. The average age is also somewhat higher than the rest of tourists (52.6 years), while the average stands at 46.9 years. Their stay on the islands lasts for nearly 10 days and the their turnover per tourist is 1,699 euros, a figure that is over 500 euros higher than the average spend of 1,115 euros.

As for nationality, 36.2% of golfers were British, ahead of the Germans (23%), Swedish (6.3%) followed by Belgians, Spaniards, Dutch, French and others.