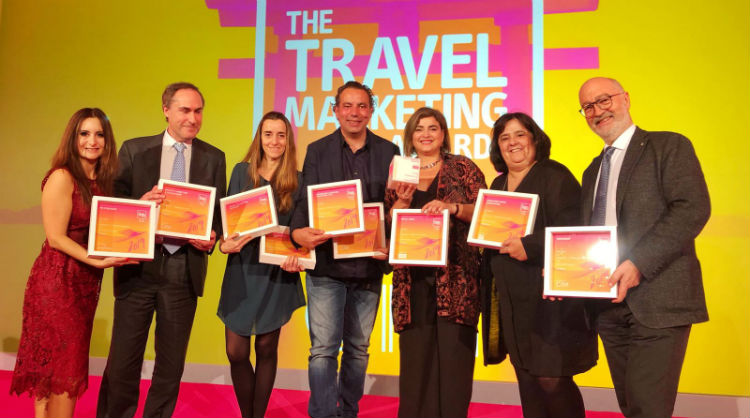 The Canary Islands tourist brand stacked up a full house on Monday, 11th March, at the The Travel Marketing Awards (TTMA) in London, where they picked up prizes in all 10 categories in which they were nominated: a Gold, two Silver, five Bronze and two finalist positions, and it was the only Spanish destination out of all the nominated and winning destinations. The TTMA are considered to be the most prestigious in the field of marketing and tourist communication in the United Kingdom, the capital of the international tourism industry.

These accolades are reward for the strategy of the Canary Islands Brand and its ability to continue innovating every year and improving its position in key markets. The jury not only valued the quality of the campaigns, but also the continual strategy of innovation and micro-segmentation which enables it to reach many types of target audiences, with content that responds to their motivations and which encourages them to come and spend their holidays on the islands.

The TTMA are closely linked to those holiday destinations historically associated to the United Kingdom, so achieving their recognition is even more commendable. Indeed, the British market is the top target audience that the brand aims to reach, and to this end Promotur Turismo de Canarias is developing an intense promotional and communicative activity aimed at British tourists.

At this the 11th annual TTMA, the Canary Islands brand competed with institutions and businesses of the stature of American Airlines, Hilton, Lastminute.com, Marriott, South Africa Tourism, Thomas Cook, Tourism Australia, Tui and Virgin Holidays, among many others.

The 10 awards received are added to a long list of TTMA awards won over previous years, now totalling 23 over the last three years. The most important of these was the Platinum awarded last year to the Canary Islands for their campaign entitled “After-Rain Ads”, an absolute prize which is only given out at certain times. This year, however, the jury didn’t award the Platinum to any campaign.

On this occasion, the awards won include a Gold for “Find me and get lost”, in the category of Digital Marketing Campaign, together with a Bronze in Social Media. This campaign, based on bodypainting, proposed that spectators seek out the silhouette of a person camourflaged by body paint in stunning natural landscapes around the Canaries.

The “Not Winter Games” campaign came away with a Silver for Digital Marketing Campaign, another Silver for Docusoap (a take on television soap operas that focus on people’s everyday lives) and a Bronze for the Campaign of the Year costing more than 500,000 pounds sterling. This is a contextual marketing campaign which took advantage of the Winter Olympic Games to remind audiences that they cannot play winter sports in the Canary Islands because of its wonderful all year round climate, and in a joking fashion highlighted some of the outdoor activities that can be enjoyed, such as rolling around the dunes on a beach, sliding down a water slide or sunbathing on the sand.

Meanwhile, the campaign entitled “The best climate in the Galaxy” also walked off with a Bronze as Best Sponsoring and Affinity to Brand Strategy, a promotion in which the Canary Islands, coinciding with the latest Star Wars production, made the most of the fact part of the filming was done on location in Fuerteventura to link the islands’ most highly acclaimed attribute, its fine climate, to the universe of this film saga.

Likewise, “Islands of Interest” achieved Bronze in the category of Innovative Marketing and a Bronze in the category of Public Relations Strategy. This campaign came in the form of a case study, and explains the evolution of communication and marketing strategy towards micro-segmentation and the generation of content which responds to the many diverse motivations that tourists take into account when they are thinking of where to spend their holidays.

The promotion made for International Family Day, “What would you like your children to remember?”, was a finalist in the category of Digital Marketing Campaing with a video featuring a group of senior citizens who conserve the memories of holidays they have spent with their loved ones to the end of their days. This video encourages parents to visit the islands and enjoy experiences that will remain in the memories of their own children forever.

Finally, the publicity campaign about El Hierro, called “Let me breathe!”, made before Easter Week last year, also reached the final in the category of Press Advertising. In this case, it attempted to reach a Canary audience and encouraged them to visit the Meridian Island and get away from their daily routine.

*The award-winning campaigns have been 85 % co-financed by the European Regional Development Fund.