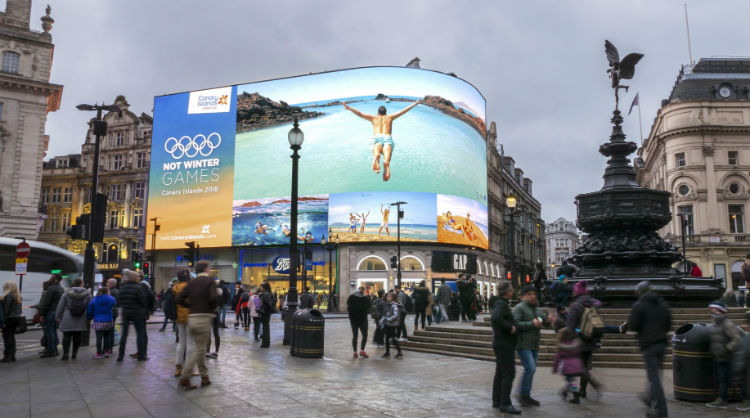 The strategy carried out by Promotur Turismo de Canarias once again features prominently in the list of the most innovative tourist brands in the international market, as it has been nominated in 10 different categories at The Travel Marketing Awards, the most highly prestigious awards in the field of marketing and tourist communication.

Campaigns to have reached the short list, some of them in several different categories, are “Not Winter Games”, “The Best Climate in the Galaxy”, “What would you like your children to remember?”, “Find me and get lost”, “Islands of Interest” and “Let me breathe”. All of these have made the final cut of nominees for best digital marketing campaign, best integrated campaign, most innovative marketing, best public relations strategy, best sponsorship strategy and afinity to the brand, social media or press publicity, among others.

“Not Winter Games” is a context marketing campaign which was devised during the Winter Olympics held in South Korea last year. Taking advantage of this grand sporting event followed by many different countries from central and northern Europe, the message was sent out that in the Canary Islands there is no such thing as “winter games”, making a humorous comparison between the real winter games and those that can be done in the Canaries at the same time, such as flying kites, playing bat and ball on the beach or jumping around on a trampoline. The campaign generated over 100 million impacts on social media and on giant digital screens located at strategic places in London, Berlin and Oslo.

“The Best Climate in the Galaxy”, meanwhile, was the campaign that aligned Canary Islands hand in hand with the latest film in the Stars Wars series in Fuerteventura, making the most of the opportunity to link the good climate on the islands to the universal setting of this cinema saga, reaching out to a family audience of interest to the Canaries.

“What would you like your children to remember?” was a dayketing campaign made for International Family Day. At just the moment conversations on digital platforms turned to the subject of families, Canary Islands broadcast a video starring a group of elderly people who are reliving memories of holidays they have spent with their loved ones. The video encourages mothers and fathers to visit the different island holiday destinations to enjoy experiences that will live long in the memory of their own children.

The promotion of the island of El Hierro entitled “Let me breathe”, made prior to Easter Week in 2018, aimed to reach a Canary audience so they would visit the island on the meridian to escape the daily grind. Canarians are the largest number of tourists to visit El Hierro, as out of the 19,978 visitors it received in 2018, 61 % of them (12,244), came from neighbouring islands, making the rest of the Canaries a key market.

In “Find me and get lost”, models’ bodies are camourflaged into the landscape thanks to the technique of bodypainting, and they showcase spectacular natural locations around the Canary Islands. In the “Islands of Interest” case study, they explain the evolution of the communication and marketing strategy done by the Canary Islands brand through the technique of micro-segmentation and the generation of specific content catering for the interests and motivations of a range of different audiences.

Canary Islands is a regular at these awards. Over recent years they have picked up several different prizes, including four awards last time around: a platinum, two silvers and a bronze. These awards have been given in recognition of the campaigns’ originality, creativity, innovativeness and greatest return. Last year’s platinum was proof that the strategy undertaken by the Canary Islands brand is capable of earning a top prize, one that has only ever been awarded on five occasions in the history of the Travel Marketing Awards, who are into their 11th year this year.

On this occasion, Turismo de Canarias are competing with institutions and companies of great magnitude, such as American Airlines, Hilton, Lastminute.com, Marriott, South Africa Tourism, Thomas Cook, Tourism Australia, Tui and Virgin Holidays, plus many others. The result of these awards will be known at the event to be held in London on 11th March this year.

The campaigns to have reached the finals have been 85% co-financed by the European Regional Development Fund.