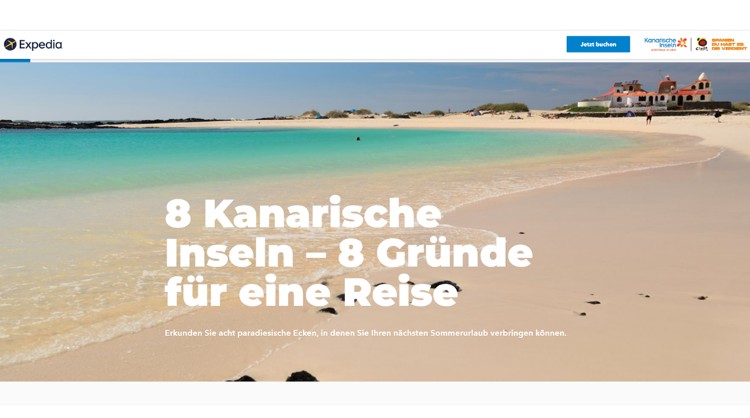 Using a strategy based on audience segmentation and personalisation, the digital platforms identify active users who are searching for competing destinations and show them advertising about the Canary Islands in a bid to influence their buying decision.

The alliance with these strategic partners and Turespaña aims to attract tourists from five markets (the United Kingdom, Germany, France, Italy, the Netherlands and Belgium) with campaigns that are running now and will continue until 30 June.

Funded in equal parts by the participating entities, investment in the campaigns totals 940,000 euros. Expedia, with more than 112 million unique website visitors and 1.5 billion page views, is the world’s second largest OTA (Online Travel Agency). Its ability to reach audiences worldwide makes it a very valuable partner for the Canary Islands. The aim is to launch nine million impressions through a campaign that includes banner placements, native advertising, social media and retargeting, impacting users who have previously interacted with the brand.

Expedia is the world’s second largest OTA and TripAdvisor is the largest travel review platform, making them very valuable partners for the Canary Islands.

With 463 million unique subscribers, TripAdvisor is the largest travel review platform and is based mainly on user contributions, giving it considerable advocacy capacity. Through website advertising and native ads, more than 14.4 million impressions will be launched, impacting users who’ll be directed to the campaign landing page, where they’ll be offered experience content and the chance to make bookings. TripAdvisor’s advanced technological system will make it possible to measure impact effectiveness, firstly by comparing the behaviour of visitors who’ve received advertising and those who haven’t, and secondly by analysing the real financial return generated by the campaign.

The action is a clear illustration of how cooperation among public entities and with private entities leads to obvious advantages. It not only optimises the investment, but also maximises efficiency by reducing advertising noise and allowing us to jointly target the same potential audience.

The collaboration with Expedia and TripAdvisor enables optimisation of the investment and maximises efficiency by jointly targeting the same potential audience.

From a creative point of view, we worked with a campaign concept recently implemented by Turespaña, a public entity attached to the Spanish Ministry of Industry, Trade and Tourism. With the title “You deserve Spain”, the campaign has been personalised for the Canary Islands with ads specific to the destination. The campaign leverages the integrating force of a global brand (Marca España) and the association with the common values it projects, while highlighting the destination of the Canary Islands with specific creatives.

It also includes two landing pages in various languages on TripAdvisor and Expedia, so that all impacts are redirected to a specific space for the destination that shows inspirational content and various products that tourists can purchase.

The Expedia campaign is co-financed by European ERDF funds, and the TripAdvisor campaign is part of the agreement signed with the Secretary of State for Tourism to mitigate the losses caused by the failure of Thomas Cook.